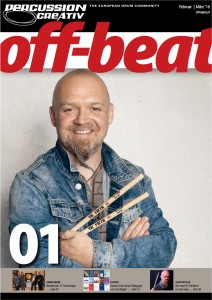 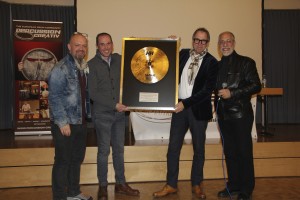 In the meeting of members at Percussion Creativ, the biggest German speaking drum-community in Europe, a new board and chairmen have been voted during the “Teacherdays” in December. I am honored to be voted the new chairman of this “brotherhood of drummers”, following Udo Dahmen after 20 years of holding this position.  The fellow members of the board include Jörg Fabig (vice president), Stefan G. Schmid (treasury) and Cord Radke (secretary). The additional advisory board consists of: Anika Nilles, Ellen Mayer, Prof. Johannes Fischer, Andy Gillmann, Stefan Landes, Florian Alexandru-Zorn, Patrick Metzger, Manni von Bohr, Domenico Russo-Antunez and Christian Felix Benning. So far I cannot tell if I’ll be able to keep this up for 20 years as well – but I’ll try my best to fill this position as good as I can!

Andy Zildjian, President of Sabian Cymbals, sent over a framed cymbal honouring Udo for his work and effort as a true visionary leader in music education, the cymbal was handed over to Udo Dahmen by the one and only Dom Famularo and Christian Koch.