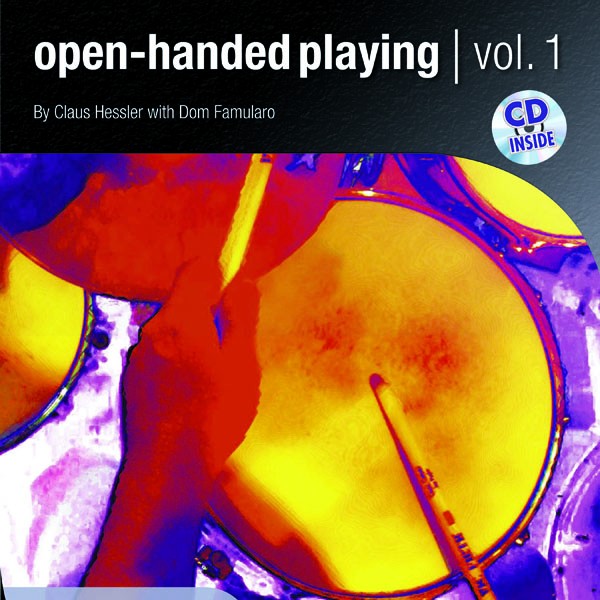 Now also available as eBook with Hudson Music Digital including updates and all the sound files!

The first educational workbook on the issue of playing “open-handed” ever. Based on ideas and concepts of drum legends Jim Chapin and Billy Cobham you’ll learn about the benefits of this way of playing. Even “cross-handed” players that do not necessarily want to switch completely to open-handed will find a lot of useful ideas and exercises to complement their own drumming vocabulary. Four fusion-style playalongs in three versions (with drums, without drums plus click, without drums and without click) will help you to experiment with the new ideas in a musical context. Foreword by Billy Cobham.

The argument around open-handed playing (OHP) has been going on for years, but I would say if you are interested in investigating and developing this concept, this book is for you. Both Hessler and Famularo break down the two approaches to OHP, which include Traditional Approach and Voice Variation. Both have their advantages and disadvantages together with guidance on how to incorporate this method into your playing, particularly if you play closed. As a player and teacher, I found this fascinating and can definitely see why some modern teachers are teaching this method. This is a must for everyone’s library, even if you decide to stick to closed-handed. Try it out – you might be surprised.

… which right handed player has not been dreaming: If my left hand was just as good as my right … Congratulations! Finally a Drum Method that brings something new, maybe even some kind of revolution to the world of drumset players … get it!

More than simply just covering the obvious approach of playing a groove riding with the left hand, OPEN HANDED PLAYING. VOL. I really digs into the usefulness of such an approach. It begins by setting up a series of exercises that develop the left hand’s ride feel, and works to illustrate the possibilities of open-handed grooves. The book then goes into voicing alternatives, an approach that’s relatively easy for the right-y to adapt to and that opens a lot of creative doors. Getting comfortable with left-hand lead can be a challenge – but it’s one that’s worth undertaking.

…this way of playing drastically enriches your musical choices and options. To reach this is the goal of this drum method … The special „open handed playing“ concept of Claus Hessler and Dom Famularo is highly recommended.